“Rescuing orphaned or hurt animals and rehabilitating them
before releasing them into a protected environment.”

This is one of Kilimanjaro Animal C.R.E.W.’s biggest mission. Wildlife is coming under daily increasing pressure worldwide. To cut a long story short – loss of wildlife habitats due to human encroachment and population growth, as well as the resulting expansion of agriculture and rise of livestock numbers, lead to a heightened human-wildlife conflict and a multiplication of wildlife threats.

Commercial bush-meat poaching (by use of insidious wire snares), the illegal wildlife trade, poaching for illegal trophies (such as ivory, rhino horn and lion bones to mention only a few), as well as the retaliatory killings of wildlife for killed livestock or destroyed crops, and many other drivers, all lead to the same outcome – killed or injured wildlife, and the numbers increase.

Whenever we get a call that there is an animal in distress somewhere in one of the National Parks or other protected areas, a team of our vets and assistants is immediately dispatched to provide rapid response and emergency aid, and, if necessary, arrange evacuation of an afflicted animal to our sanctuary at Makoa Farm.

We have done many field operations and rescues, as you can see in just a few examples here:

Every rescue helps! But also, every time we go to help an animal in need, it takes lots of funds as well. We never turn down a rescue, but we depend on donations of people who realize how important these rescue missions are; not only for the individuals, that get a second chance, but also for the general Tanzanian awareness.

If you would like to support our field missions, please donate to: ‘Wildlife Rescues’

Amazing news!! 😍😍 One measure of the success of rescue, rehabilitation and release is when the released animal is seen with own offspring. With so much happiness, we'd like to present Jerry and her kitten!! 😊🥰 We are so grateful for this progress and can't wait to see what the future Read more

Even on Sunday, Burigi is always up for work. He decided that there might be a weak point at this corner of the fence which he ought to check up on before going out for the daily bush walk. Instead a long explanation he decided to prove that it’s not strong enough anymore. He was right, some Read more 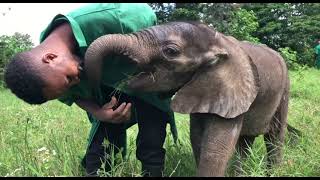 Kiteto learns to eat her greens :)

Kiteto is making slow but steady progress. She is now stable enough to spend most of her days out with the little zebra and ostrich and also her sheep companion Suzi. She’s now learning that the soft greens that make a nice bedding, are also edible - although she isn’t sure yet exactly how to Read more

Have a look at this wonderful video about Maswa - put together by her sponsors, the Elephant Read more

Donation successful
Make a donation
Please choose type of donation you want to make:
Go to animal page
.00 $
per month